War is nothing but a string of great tragedies. While most people rightly think of the Holocaust as the greatest tragedy perpetrated by the Germans in World War II, few realize that the suicidal invasion of the Soviet Union was almost as great. The cold statistic is that most (about 80%) of the German soldiers killed in the war were killed in that invasion.

Alexander Starritt’s novel portrays a veteran of that invasion writing to his grandson about the experiences he had. To my surprise, Oberkanonier (Chief Gunner) Meissner’s letter focuses on the German retreat when the German High Command ordered its armies to march west as fast as possible in order to be captured by the American forces before the Russians found them and exacted retribution.

Meissner writes, “We did it first, and worse. In war, the mechanism of justice is retribution. Woe to the conquered. And justice was performed in aggregate, not for individuals.” He goes on to say that while neither he nor his comrades declared war or delivered people to the camps, “We’d come to understand . . . that we were in the wrong.”

Meissner’s narrative starts when he and his few remaining comrades were in Czechoslovakia, near the German border. The location is not so important to the story as the fact that the group was far away from any connection with the German command. The result was a complete breakdown of the much-vaunted German Army discipline. 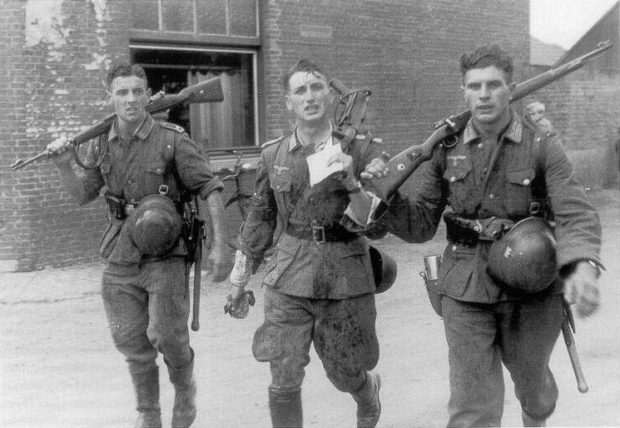 The mayhem includes events such as an assault and murder of a military police unit to get the food and supplies the police were guarding. There was more mayhem as they drank and ate to celebrate the absence of any controls on them and taunted a captured Czech prostitute before releasing her naked into the woods.

One of the group leaves during the night and, fearing his suicide Meissner and a colleague set out to find him. Their adventures are one episode after another involving the two men or the other troops they encountered that demonstrate that they have lost touch with sanity. Their observations, including finding a whole village of people hanged from a tree and another group of people crucified on the side of a barn, showed them that the entire world around them had gone insane as well.

The narrative gets quite scrambled in the last third of the book which I think was the author’s intent as it brings the reader closer to an understanding of the insanity. The last major incident comes when they encounter a Soviet tank troop and attack and kill some of its soldiers while others escape in their tanks. Meissner and his two remaining comrades board a tank the crew of which they have killed and proceed to attack the other tanks. Finally, they are defeated, captured and wind up in a Soviet Gulag.

Meissner’s conclusions are scattered throughout the book. I thought these were important: “The most merciful aspect of surviving a war is actually how much of it you forget.”  And, “. . . you can be culpable for something that you weren’t in control of. And me personally, that’s what I’ve been trying to answer.”