When I bought my first IBM PC in 1983, I also bought a printer that turned out to be not fully compatible with the one IBM was selling. Most programs at that time assumed the IBM model would be attached, so features such as boldface and italic printing were not available to me.

I wrote a little utility program that made my printer work with the PC, then generalized it to work with any printer, and created packaging and a user manual. I persuaded Craig Stinson, Editor-in-Chief of Softalk for the IBM PC, to review it in his magazine.

After he reviewed the program Craig and I discussed the rapidly expanding array of available printers, most of which were at least partly incompatible with the IBM PC, and I suggested that among the Softalk’s many tutorial columns he should add one on how to use those printers with the PC.

“Why don’t you write it for us?” he asked. “Sure!” I replied, although I had not the slightest idea how I might do that.

Craig was taking a bit of a risk on me—he had no idea of my writing skills and I had no professional writing experience. The only things I had ever published were a few articles for my college newspaper and for 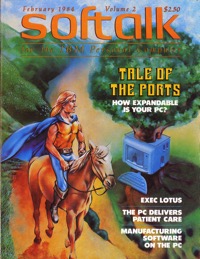 I modeled that first printer column on technical columns written by Softalk columnists like Peter Norton (yes, that Peter Norton), John Socha, and Ray Duncan. I worked hard on it because I thought this could be the big break that would allow me to leave my boring bank job.

When I thought the column was right, I embedded it in an email message and sent it off to Craig who called to tell me it was “fine” and to get working on the next one. When the issue of Softalk arrived with my column featured as a new item in the center of the magazine I read it and was astonished to see that Craig had not touched a word or a comma . . . or so I thought until my second, more careful, reading.

I discovered that Craig Stinson is not just a fine editor but a very kind man because while he did not say a word of criticism about the column, he did a very thorough editing job that included much more than repositioning a few commas and changing a few words. And even as he rewrote whole paragraphs, Craig somehow retained my voice, a technique he was to teach me over the next several months.

As it turned out, Craig thought I had potential as a writer and asked me to go beyond my column to write some feature articles. I had the technical knowledge and began to develop approaches to product and technology stories that worked. I kept my bank job, but soon my nights and weekends found me sitting at my PC pounding out articles for Softalk and being damned happy doing it.

So happy that after a few months of Craig piling on more and more work, I quit my job to write full time. The articles were popular with readers and there was just enough money coming in for it to make financial sense for me.

By a few months later I was writing nearly half the magazine’s editorial content, but the payments were not coming nearly as fast as I was writing, and sometimes the payments did not come at all. So, it was a good thing that among readers who liked my articles were editors and writers at the competition.

One afternoon PC Magazine executive editor Paul Somerson called to ask if I was the John Dickinson who was writing for Softalk. When I affirmed that I was, he said, “You’re writing for the wrong magazine,” and asked to meet with me.

The opportunity to write for the fastest-growing computer magazine was too good to turn down. Craig and Paul both assured me that I could write for both magazines if there were no conflicting assignments. That was a good thing because within a few months Softalk closed its doors and filed for bankruptcy, while I continued with PC Magazine and started a career at Ziff-Davis Publishing.

Craig Stinson believed in me, took a chance on me, and trained me to be a computer magazine writer and editor. That foundation was the basis for a career that was successful, exciting, and satisfying, beyond my wildest dreams. It lasted until I retired, and Craig remained my friend and mentor throughout.